Home Balance Sheets Is A Tiny House For You?

Is A Tiny House For You? 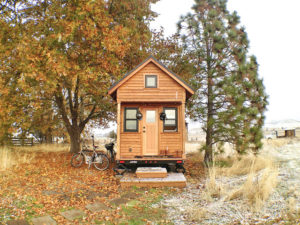 I recently watched a documentary about tiny homes, and I have also read many articles lately about them as well. They seem to becoming more and more popular each and every day, and today I would like to talk about them.

A tiny home is typically less than 200 square feet. Sometimes they can get as big as 500 feet, but a tiny home in essence is really just a home where all of the space is a home is efficiently used. Tiny homes usually have one main room, with sometimes a loft bed on top. Usually the space in the main room can convert to many different spaces, such as the dining room into a living room, and so on. They are usually on wheels to protect the home from having to abide by certain building/local laws, but that doesn’t mean that they are unsafe.

I used to live in a small house that was less than 500 square feet, but it technically wasn’t a “tiny home” because it was an actual house with a basement and everything else. It was just small and the square footage in the house that it did have were actually horribly used. This house probably had the worst setup I have ever seen!

Below are some of the things to think about if you are interesting in living in a tiny home.

You can save money on the actual house.

Most tiny homes can be built for relatively cheap. This is because they are so small that less materials need to be used, of course. You can also save money on any repairs or maintenance since not as many things will need to be repaired or maintained. That’s a lot of money saved! Just think about it, you won’t have piping, electricity, wires, or anything else running extensively through your house since it will be small.

Also, since the home is so small, you won’t need as much expensive furniture as if you had a “normal-sized” home.

You can save money on utilities.

Since this is a tiny home, it takes a lot less electricity, gas, and so on to heat or cool down the home. This can save you a lot of money on utilities because you won’t be trying to heat, cool, or light rooms that you are not in.

You can really live the minimalist lifestyle.

With a tiny home, you really need to watch what you buy. Every single thing you buy needs to serve some sort of purpose with a tiny home, and this will help you become more of a minimalist.

In life, I don’t think people really need all of the things that they actually buy. You can buy just a few quality pieces and be set for quite some time, instead of buying several trendy pieces that are cheap and need to be replaced all the time.

Having a tiny home means that you can no longer be a hoarder!

You can live where you want.

I have seen many tiny homes in great locations. This is usually because the owners have saved so much money on their home that they can really afford to live where they want. You can buy a piece of property and move to where you want to, or if your home is able to be transported, you may even be able to take it with you and move around to amazing places.

Would you live in a tiny house? Why or why not?

How To Drop Your Debt Fast