Home Balance Sheets Ways That Being Cheap Could Cost You Money

Ways That Being Cheap Could Cost You Money 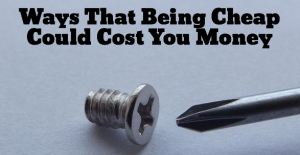 Everyone has been cheap at some point in their life. Sometimes being cheap can save you money, but other times it may end up actually costing you money. Don’t you hate whenever that happens?

Here are 10 ways when being cheap can actually cost you more money.

How many times have you tried a new and cheaper food only to find out that it tasted disgusting? The best way to try a different and cheaper brand is if you buy a small quantity first to see if you even like the product. Stocking up on a sale without even knowing what is taste like is probably not the best idea.

Trying to fix something yourself and it turning out badly.

Many people do this. They try to fix something themselves but that it gets terribly out of hand and before you know it, you break the product even more. You might even have to hire “real” help to fix the original problem and also fix what you added on to the mess.

Examples of this include:

Ignoring a prenup because you don’t want to pay for a lawyer.

If you are thinking about getting a prenup, but you don’t want one because you have to pay a lawyer to draft the agreement, then you should definitely get a prenup. The cost of one should not be what is stopping you.

No one wants to think that their marriage will end badly, but if you are thinking about getting one from the very beginning, then that should be a sign that you definitely need one.

Buying a Groupon and then never using it.

Have you ever bought a Groupon and then never used it? Many people have done this, and it’s a waste of money. Only buy coupons such as on Groupon if you know that you are going to actually use the product.

When was the last time being cheap cost you money?

What You Need To Know About Early Retirement