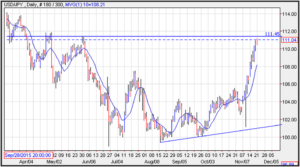 Support and resistance levels can be used for entry and risk management.  Many times, you might have considered entering a trade when the exchange rate of a currency pair breaks through a trend line.  You could then find target support levels that would act as your take profit level. For example, if the USD/JPY closed above the horizontal trend line at 111.45, you might have considered taking profit at target resistance near the next horizontal trend line at 111.90.

Another technique might be to purchase the currency pair when the exchange rate falls to support near the 10-day moving average.  You could then use the target resistance of the horizontal trend line as your take profit level.

Support and resistance are the cornerstones of technical analysis.  They profit levels where you might consider entering a trade as well as levels that provide the backdrop for your risk management.  Technical analysis is the study of past price action as many traders believe that all the available information is already incorporated into the exchange rate of a currency pair.

Can You Win The Powerball If You're Not An American Citizen?

From Flexibility to Cost: The Benefits of not buying a House Explained