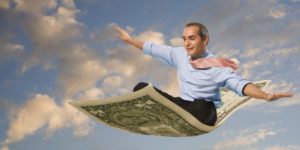 Ever generation has their own stereotype, and Millennials are no different. What is different is the way that we have analyzed Millennials to such a great degree. Wanting to know what makes them tick and how they are going to do when they inherit the world we are leaving behind, their behaviors are very intriguing because they don’t chive with any other generation that has come before.

Being brought up with technology and the internet, many Millennials who we once presumed would be lazy, unfocused and undisciplined are proving old-timers wrong. A generation that has experienced great success through small business loans and entrepreneurial ways are helping out the economy in ways that we never foresaw. The problem? They aren’t investing the way that they should to grow the wealth that they are cashing in on.

Millennials differ in many ways, but the biggest, when it comes to investing, is that they are ultra-conservative with their investment habits. It used to be that the younger generation would fly fast and loose with their capital, believing that they had a lot of time to make it up. Trying to cash in big, they often put risk on their investments early on and then grew conservative over time as retirement came closer.

Recent surveys show that the world’s wealthiest Millennials are investing in a way that is nontraditional, much like everything else they do. Findings are showing that they are keeping a third of their money in cash. The kind that those from the great depression kept hidden under their mattress and in bank accounts that earn no interest, but that they can access if they need to.

Apparently, Millennials understand that when an opportunity arises, you only have a very limited amount of time to hop on the train, and if you miss it, you miss out. They want to have the cash on hand to make an investment when it presents itself. It isn’t that they don’t understand the way that wealth works, they just aren’t interested in tying up their capital on risky investments that are handled by hedge fund managers, they want to be in control of where their money goes.

Driving the trend is that they grew up in an instantaneous world. It isn’t like the old days when you heard about some new stock through a channel and got in quick. The new generation has to beat out the competition by beating out social media, which is no small feat. There is no time to make the calls to liquefy capital when you need it; it has to be in the form of reachable cash.

By the time the average investor hears about the hottest trend or stock, it is too late. A whole new mindset, Millennials understand the chain of information about investing and the urgency with which you have to act, or your opportunities will be yesterday’s news.

So where are they going wrong?

If a millionaire is keeping a third of their wealth idly sitting they are missing out on gaining any capital growing from it. Although not wanting to tie it up, without making any allocation at all, they are missing out of huge investment opportunities that are available to grow their wealth. It isn’t that they need to tie their money up, but letting it sit without any allocation at all, is merely draining their resources and losing money on their behalf.

You can’t blame them for the way that they think. The economy, for as long as they have been involved in it, has been shaky and unreliable at best. Global economies crashing abound, very few ways to earn capital without tying up your cash or turning it over to someone else; there just isn’t the trust that there used to be in using outside help for your investment needs. Wanting to go it alone, they are figuring out new ways to grow their money without risking turning it over to someone they don’t trust.
The lesson to be learned is that getting in on a new prospect early is still the best way to go, but you can’t let your money sit idle waiting for the next opportunity. That is not the way to go. Millennials should give more thought to short-term investments and finding someone that they trust to manage their cash in a more effective way for their future.

6 Ways To Earn A Second Income

Side Jobs to Aid your Business Funds